Ajijic’s non-profit center for arts and culture, presented a night of Flamenco with artists from around Mexico and surprise guests from Spain, who treated the Lakeside crowd to a unique performance of world-class skill and contagious laughter

Patrick O’Heffernan (Ajijic).- This weekend, the La Cochera Cultural gave the people of Lakeside a magical night of dance, music, and laughter. The event was  Flamenco! with  dancer María José Valdés, singer Julio de la Isla and guitarist Carlos Iván de León, assembled by producer Emilia Gálvez, who also danced and played the cajón. Valdés was a special treat for the Ajijic audience because, despite being renowned throughout Mexico, it was her first time dancing in Lakeside.

The magic materialized almost immediately as Morelia-based Carlos Iván de León kicked off the first song on his guitar and the tapatio singer Julio de la Isla’s vocals sailed over the guitar riffs and throughout the center. His voice was mournful, although Gálvez said later that the lyrics are not always as sad they sound, but because of the singing style and the differences between Spain’s Spanish and “Mexicano” they can be hard to understand even for Spanish speakers. 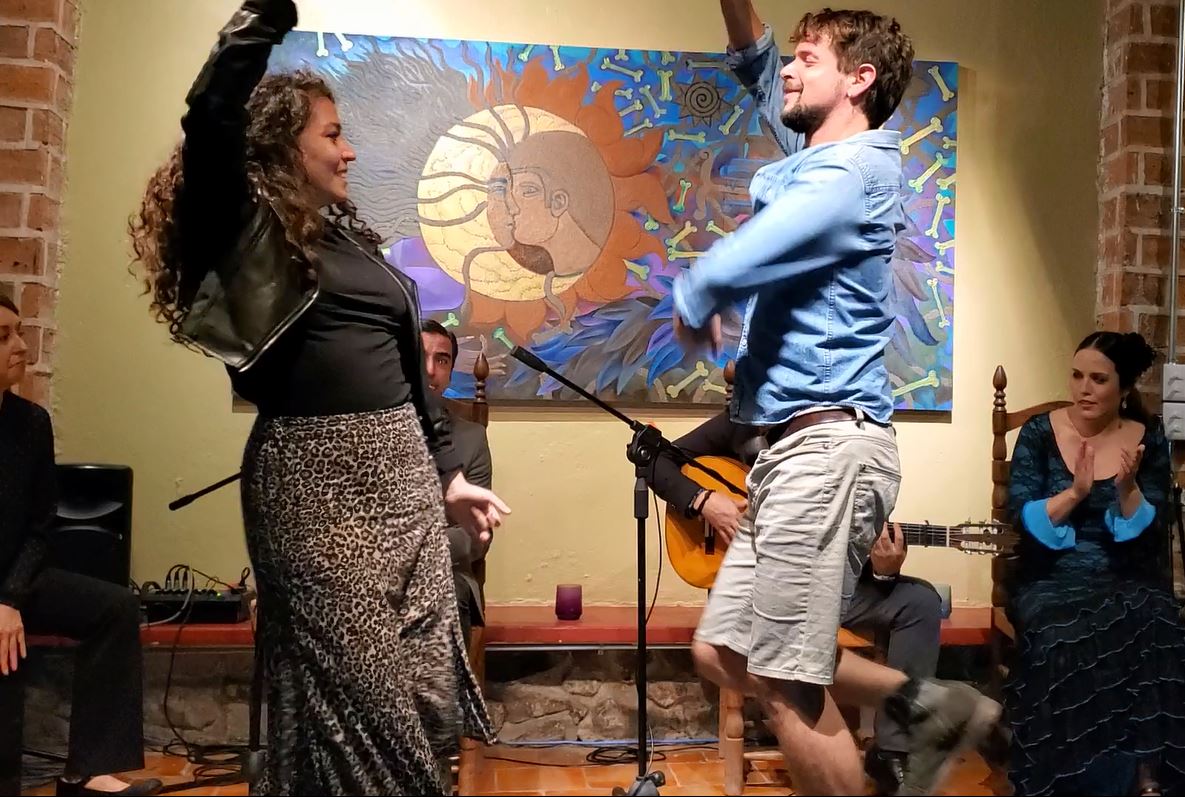 Gálvez joined in on the cajón, her hands and fingers weaving a subtle percussion fabric with the vocals and guitar notes. Then the dance began. María José Valdés virtually attacked the dance floor, her body and her feet speaking a powerful language of angular poses, sharp motions and explosive contact with the wood beneath her feet.  Known for her performances at the “Bailadores del Mundo” during the Flamenco Summers of Love of God 2019, the Aguascalientes resident displayed a technical perfection and the emotional depth that stunned the crowd. She swung her movements around the anguished vocals and aggressive guitar riffs of Carlos and Julio while Gálvez created a percussion backdrop on the cajón that molded itself to Valdez’s movements.

But there was more magic to come, there were two young dancers visiting from Spain who were there just to watch and enjoy, but Gálvez coaxed them onstage, despite the fact that the male dancer was wearing hiking boots and the young woman street shoes  Footwear aside, they wowed the crowd not only with their exuberant and technically superb baile, but with laughter at their situation of clomping on the dance floor in hiking books and loving it.

Then Gálvez  and María José Valdés joined them and the four danced together and in pairs in an improvisational round.  Afterwards Galvez told us that dancing together with no practice was natural. “Flamenco is all over the world”, she said, “but there are structures within it we all understand and we get to improvise in the spaces in between the structures”. The audience did their own improvisation by alternating between clapping in time and shooting videos on their phones. The night ended with bows, laughter and phones full of once-in-a lifetime images.