ARTIST OF THE WEEK

Patrick O’Heffernan (Ajijic).-  The former Director General de Actividades of the Secretaría de Cultura of Jalisco, Santiago Baeza has a broad knowledge of art in Mexico and other parts of the world and it’s interplay with government, society and economics. He is a renowned abstract artist whose works are shown in New York, Los Angeles, Mexico City, Guadalajara and other major cities.

His sculptures reflect the urban nature of abstract art-simple, minimalist, honest. They range from small table-top objects to installations large enough to stand in (he encourages it). They interweave empty space with strong shapes and undulating forms, sometimes leading the eye in circles, sometimes deeper into the piece and sometimes out of it to turn around and see it from a different perspective. Walking through his outdoor studio, strewn with his children’s toys as well as with sculptures in various stages of construction for a major show later this year, he tells how his  role in the government and politics and culture of Mexico has contributed to his focus on abstract art. “I love abstract art because it liberates me from the politics –I make art for the people to enjoy. When I do art, I give the people the opportunity to get out of this sick society, to leave the political behind”, he says thinking about the role of art in Mexico. While his forms are abstract and flow from a history of abstract art in Mexico that pre-dates the Spanish, he prefers that the viewer has to bring a personal meaning to each piece. ”All art has to tell a story, but my case is different; I have always separated my politics and my art. When I am working on a piece of art, it is mine, but when I finish it, it doesn’t belong to me.” This spirit carries over to his emphasis on art that is for people, not government commissioned. “Artists have to live from the market, and not from the government”, he says. It also contributes to his disdain for titles on his art. “I hate putting titles to my art. It is very difficult – I don’t like to box people in… I want the piece and the people to have that liberty.” 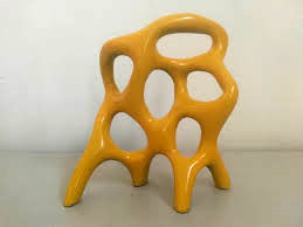 People in Ajijic can follow Santiago Baeza on Facebook, to find out when his new show will go up in Guadalajara and other cities.

Luz Preciado and Thomas will have a final big art sale, as they will move to another country
Exceeds expectations the 42nd Annual Mexican National Chili Cook-Off