The “Hoping for the Best Tour” launches Friday on Facebook Live

Chuco Soto will kick off the Hoping for the Best Tour  online concerts from Ajijic.

As promoter Ray Domenech of  Ray Velvet Productions says, “Music never has to stop.. and we are not planning to stop either” in his announcement of a Rezzonante Series of online jazz concerts broadcast live from Ajijic, Mexico.  Domenech is helping to add Mexico and jazz to the exploding online social distancing music movement that includes stars such as Alejandro Sanz & Juanes, Jimmy Buffet, Common, Lisa Loeb, George Clinton, Garth Brooks,  and more. Jazz is just now entering the online field with concerts by Reneewinter , Hue and Cry, and Ben Gibbard of Death Cab for Cutie, but Domenech’s series will significantly p the presence of jazz online and will help bring Mexico’s world-class jazz to the world.

The series, called the “Hoping for the Best Tour,”  begins this Friday night at 6 pm CMT and will be broadcast live from Casa Domenech, one of the hubs of the jazz community in the Lakeside community outside of Guadalajara and the scene of many memorable concerts by many memorable artists. The first session in the series will feature the Powerful Jazz Trio from Casa D, comprised of Chuco Soto on the sax, Gilberto Rios on the bass and Miguel Soto on the drums. Each of the musicians is a master in his own right and have played with stars like Gerry Lopez and Derek Brown.  Ray says that , “for this first program of the Hoping for the Best Tour they are geared up to play their hearts out.” 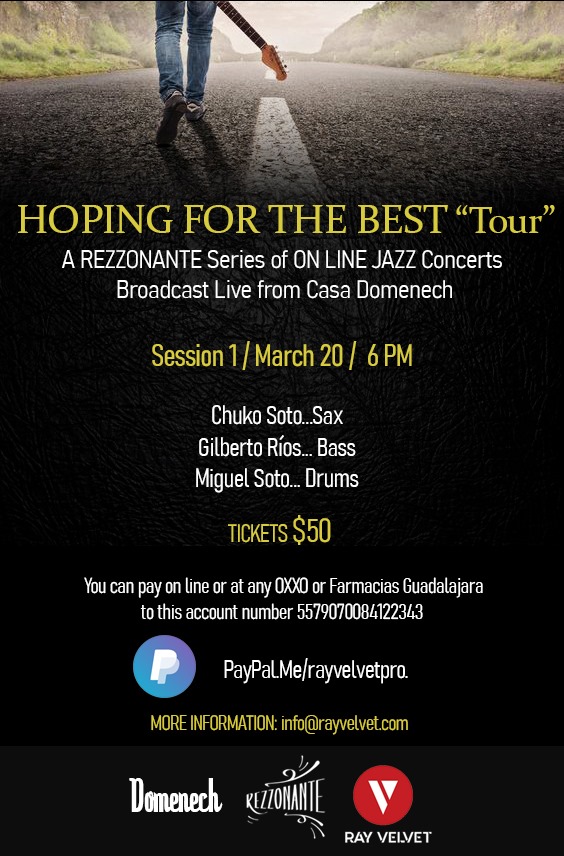 Poster for kickoff event for Hoping for the Best tour online concert from Ajijic.

Concerts in the “Hoping for the Best Tour” will be on different nights of the week, depending on the artist’s schedules, but will be broadcast live from Casa Domenech for the foreseeable future.  Casa Domenech is the perfect venue for live online concerts as it has the necessary sound equipment and is familiar to almost every musician in the Lakeside region and beyond. The concert will be transmitted on Facebook Live with a ticket cost of 50 pesos – about $2.10US.  Payment can be made via PayPal at Pay/Pal/rayvelvetpro (locals can purchase virtual tickets at OXXO or Farmacia Guadalajara using the account number 5579070084122343). More information is available at info@rayvelet.com or by phone in Mexico at 3331506940.

With new online music platforms like Bandcamp/Twitch popping up and more and more artists moving online both out of Coronavirus necessity and because they can reach much wider audiences without the cost and work of touring,  “quarantine music” looks like it is here to stay with or without a pandemic. The music world sat up and took notice when Alejandro Sanz & Juanes both had to cancel their concerts in Bogata, teamed up to produce the online “El Gira Se Queda En Casa Para Todos (The Tour Stays Home for All) and drew 5 million viewers without the huge cost of production, ticket price sharing and travel. It looks like Domenech is at the crest of what looks to be a new wave in music entertainment, especially in jazz and in Mexico.