What will Coronavirus do to the vibrant music and restaurant scene in Lakeside? We ask Ray Domenech

Around the world and especially NOB, music venues and restaurants have been closed and events cancelled. Plus, audiences are leaving town or staying home. A Lakeside music promoter and restaurant owner looks ahead

Patrick O’Heffernan. (Ajijic).- Restaurants and bars and music venues are closing down throughout Jalisco, including those in Lakeside. Early casualties included the Spotlight Club in San Antonio de Tlayacapan and the Lake Chapala Society’s Blues Festival, which has been postponed along with Chapala’s International Folklor Exhibition planned for April.

While experts say cases ware rising in Mexico, Mexico and Jalisco are far from “hotspots” compared to the US, but the danger is real and participation in the Lakeside music and dining scene started falling sharply last week. Ray Domenech’s Ray Velvet Productions brought the saxophone player Derek Brown to the Auditorio and, although the audience was good, 85 people called and cancelled because they were afraid to go to a public concert. Other venues report a softening of audiences overall and now many are closed.

To get a better understanding of the impact of the virus on Lakesides music and dining scene, we asked Domenech what he saw as the future of music and dining in Lakeside if the Coronavirus continues to rise in Mexico and especially Jalisco and Lakeside. Here is our interview edited for space:

Semanario Laguna: You promoted a concert last with saxophonist Derek Brown. Your audience was good, but you lost some people, What happened?

Ray Domenech: Yes, there were a lot of cancellations. People said they were uncomfortable, it is a big venue, coronavirus is going on. And I understood. But most paid for the tickets. My main concern was the artist-audience communication, and that was still good.

Semanario Laguna: Did you have other shows planned for the Auditorio, which was going to be open until July when remodeling started?

Ray Domenech: Yes. I was planning on doing another dance show at the end of April, and I had some other shows I wanted to do after that, but that won’t happen now.

Semanario Laguna: Have you talked with the owners of other venues and music restaurants to see if their business has been falling?

Ray Domenech: Yes, for sure it is down. There is a little fear surrounding the virus. Also there are a lot of Canadians who are going home because of health care – they have a different system. I have not talked with some of the big place’s like Adelita’s or El Barco but the Spotlight has closed down.

Semanario Laguna: Have you been talking to other restaurant owners? Is business down? Are there plans for changes.

Ray Domenech: Yes, business is down. There is a group of restaurant owners who are thinking of selling certificates that you can buy now and redeem after the virus. That could keep many of us going for two or three weeks. Some shifting to doing delivery or take-out. 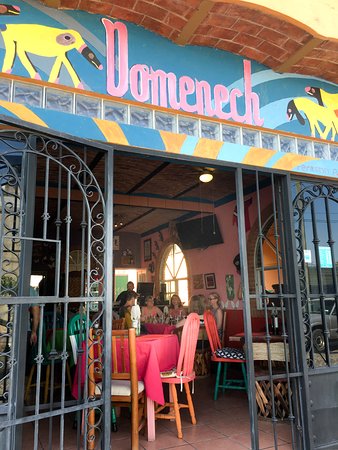 Semanario Laguna: What are your plans?

Ray Domenech: We are all looking for what is a good for our customers and good for security, My plan is reduce days we are open, do take-out, probably not delivery. The market will be more complicated. We might take out a few tables although we are very small, reduce music nights or just have friends come in and jam. We want to stay open as long as we can or the government tells us to close down.

Semanario Laguna: Hopefully, that won’t happen. There are very few cases in Mexico and very few in Jalisco. If the government does tell you to close, you mentioned other ways of getting music out, like online concerts.

Ray Domenech: We are planning on doing one concert a week and broadcasting it. I know many friends who are going back to the states and they can keep up with their favorite lakeside bands.

Semanario Laguna: You could create a new market.

Ray Domenech: Maybe in the long term, it would be a nice way to go. The musicians will get more attention. Derek Brown told me he was so very impressed with the quality of the music here in Ajijic and the band that he played with.

Semanario Laguna: Is there a possibility for two or three families and their favorite artist. They would provide social distance.

Ray Domenech: That would be wonderful. I have thought about that. We need to look at the numbers and the cost, but yes, I would like to do it.

Semanario Laguna: How would take-out work for you? Delivery?

Ray Domenech: Delivery is very difficult for us, but for people to order and pick it up here and even bring their own containers, it is a great option.

Domenech is launching the first online concert in a ‘Hoping for the Best Tour” Rezzonante Jazz Series Friday, March 20 at 6 pm on FacebookLive. Information at https://www.facebook.com/domenechrestaurant/)