Kassi Valenti getting the new Stoplight Club for its grandopening April 15.

Patrick O’Heffernan, Ajijic. The Los Amigos Big Band’s “Welcome Spring” concert will open  Wednesday April 7 at the 4TO Sentido restaurant in San Antonio Tlayacapan, after two previous concert dates had to be scrubbed because of Covid.  The concert will kick off at 3:30pm with 2 hours of Expat favorites and some classic Mexican hits.

The Los Amigos  Big Band,  comprised of 20 Mexican and Expat artists, features 4 vocalists–Christy Carter Caldwell, Andrea Pérez Romero, Wanda White, and Lorenzo Elmo Adam,  was founded by local musician and entrepreneur Christine Phillipson.   Philipson worked hard to assemble a multicultural band of the best musicians she could find locally, although a few of the musicians, like the famous swing band leader Klaus Mayer,  are from Guadalajara.  The concert band will be directed by Paul Silverman of Ajijic, formerly music director at Big Band de Playa del Carmen.

“It was a lot of work to put together a bi-cultural big band – a lot of phone calls,” Philipson told Laguna in a phone interview, “ but our mission is to help local musicians who have been hurt terribly by Covid,” she said, adding that musicians who contract Covid can have problems with their lungs for years after the virus has left their body, especially impacting singers and horn players. 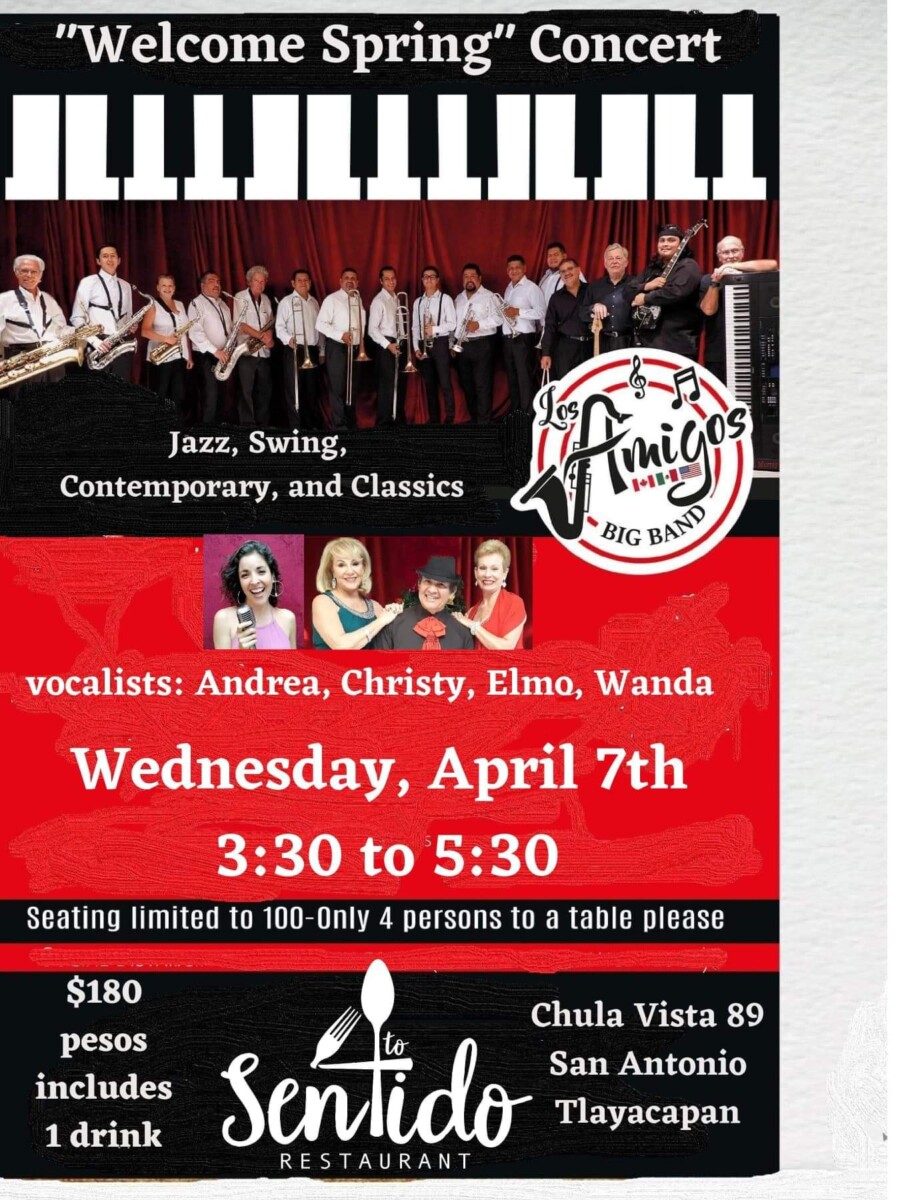 “My mother once told me I have a love of music, but not a gift for music, so playing would not be my career,” she said, noting that she actually plays the alto sax in the Los Amigos Big Band. The Band allows her to indulge her love of music while helping musicians and providing unique entertainment to the Lakeside community.

The April 7 concert at the 4TO Sentido – formerly the Hole-in-One and then the Avocado Club – will be produced with full Covid protection, including mandatory masks for dancers.  Philipson pointed out that most of the anticipated 100-person audience should have had a Covid-19 vaccination by April 7. The restaurant is known for its fine international cuisine and may serve a  special menu of classical Mexican and word food.

“Welcome Spring”, Wednesday April 7 at the 4TO Sentido, Chula Vista 89 in San Antonio Tlayacapan. Tickets are $180 pesos with one drink: food is extra. Tickets are available at   mxnphilly@gmail.com or at the restaurant.