Rolf Stengel in the doorway of the newly reopened Bar El Camaleón.

Patrick O’Heffernan, Ajijic. Music and cocktail aficionados, not to mention a loyal drinking crowd, were crestfallen in March when the iconic Bar El Camaleón closed, unable to stay in business because Covid restrictions and its owner’s husband’s illness forced it to cut its businesses and eventually close. But they can now rejoice because it has reopened, slightly reconfigured, but with music, art and of course mixed drinks, tequilas, mescals  and beers.

Bar El Camaleon was opened in 1995 by a group of Guadalajara artists led by Germán Adolfo Villa Guzmán.  It was originally a bar-restaurant-gallery located  at Marcos Castellanos #2.  Food gave way to drinking , music and art about three years later and the bar/gallery/music venue continued on uninterrupted for two decades until March of this year when it shut down, reportedly permanently.

But icons never die – they reopen and keep going.  Long-time bartender/manager Rolf Stengel sat down (at the bar, of course) with Laguna to report that the owner had decided to reopen it February 8.  What made a new start  possible was the remodeling to create a space for the new Gallery 2 to open onto Marcos Castellanos (also known and Ramón Corona)  and shifting the bar entrance to its other side, 29 Constitución.  This enabled the bar and the gallery to split the rent, making it possible for the bar to make ends meet, despite still slow business. 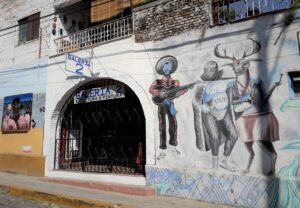 “Business is still very slow”, Stengel told  Laguna, “but I think it will catch up now that the restrictions have been lifted.  We are seeing some of our old customers return,” he said, adding that they have music which brings in business.  Bands are scheduled for the next two weekends.

What used to be the back half of the bar and the upstairs area is now occupied by Gallery 2  which is operated by a long-time customer of Camaleon.  Because the wildly painted exterior of the Bar El Camaleon wraps around the building from Constitución to Marcos Castellanos, catching the eye of art-shopping tourists who see an opportunity to refresh themselves after a hot afternoon of gallery-hopping, or to come back later for beer and music.

Rolf is happy to be back and looks forward to his regulars trickling in as news spreads that the Bar El Camaleon is open, and to greeting new customers who come for the weekend music… another sign that Ajijic is starting to change its colors, chameleon-like – from closed down to exciting.