Five a.m. fireworks in Lakeside:  an explanation from Ajijic

Victor Rochin launches a cohete during the opening procession for the Fiestas of San Andrés in Ajijic, Jalisco, Mexico. The Rochin family are coheteros, one of Mexico’s thousands of families who dedicate themselves to the production of fireworks, including Mexico’s famous fireworks castles. Photo and text: danestrom.com

Patrick O’Heffernan, Ajijic (JAL).- Its five o’clock in the morning and you are awakened by the sound of a skyrockets going off somewhere in town.  The explosions also woke your dog who is starting to hyperventilate and look for something to hide under.  About 15 minutes later you have calmed the dog, gotten back in bed and started to drift off when more fireworks explode.  This goes on until around 6 am when you hear a string of fireworks accompanied by church bells that last for several minutes. What is going on?

What is going on is the Fiesta de San Miguel, a tradition that was abandoned 200 years ago and brought back by the people of Ajijic in 2016. What you are hearing are cohetes, fireworks exploded to celebrate the Fiesta de San Miguel – Saint Michael the Archangel.  This fiesta celebrates one of Ajijic’s patrons, the other being the Virgin of the Rosary and Saint Andrew’s – Ajijic’s principal patron-. San Miguel is the patron saint of the neighborhood that bears his name, located at the foot of the mountain above Perry’s Pizza and the Hotel Lindo.

The celebration begins on September 29 late in the afternoon with a procession that starts in the San Miguel neighborhood and winds through Ajijic.  Worshippers carry the statue of San Miguel from La Crucita, a hillside cave above the San Miguel neighborhood, through the barrio Seis Esqueinas, around several other neighborhoods and then back to barrio San Miguel where a fiesta begins.  Fireworks are part of the fiesta, especially a bull-shaped rack of fireworks that people hold up and run around with like el torro in danza folkloríco (for a map and photos of the celebration see the Lakeside Guide’s free downloadable book of holidays and celebrations in Lakeside).

The early morning fireworks begin the next day about an hour before morning mass.  They are set off by neighborhood organizations, often affiliated with workers comunitades, who use them as part of the celebration of the saint. Although they start an hour before mass and lead up to it, the church does not support the cohetes or endorse them as a call to mass. 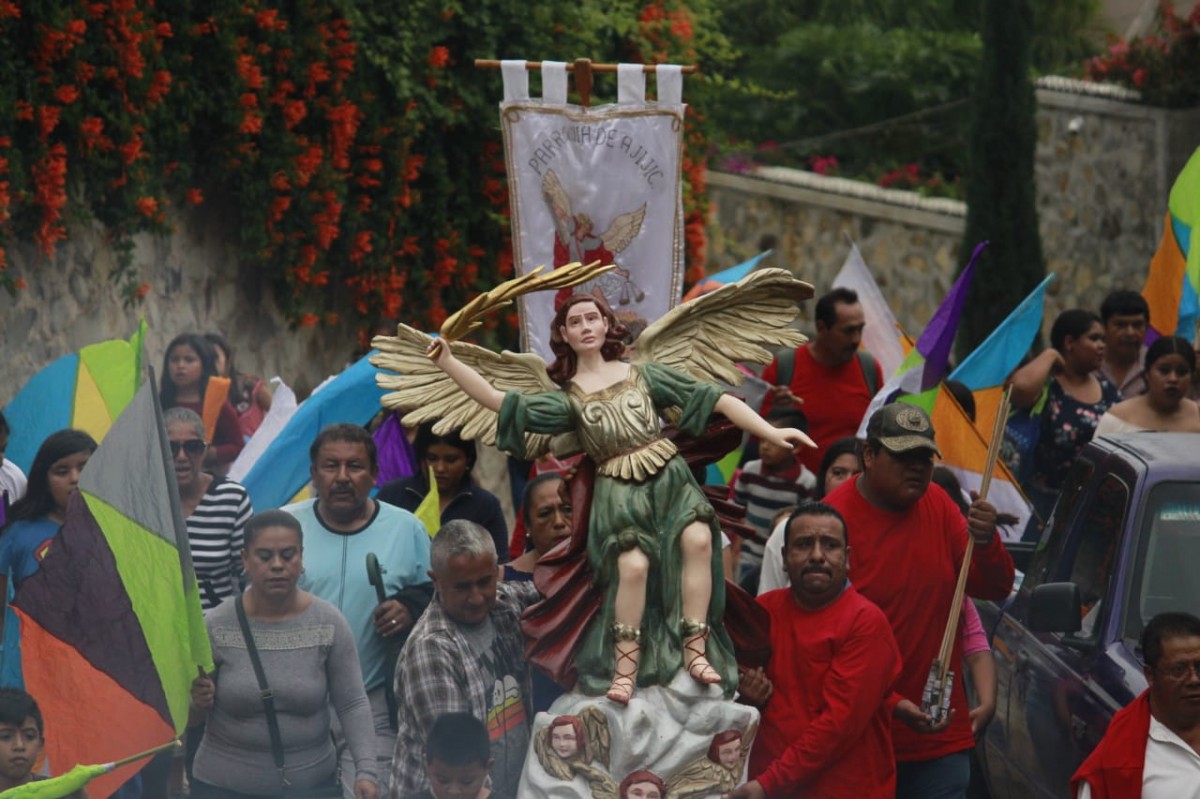 What you are hearing are cohetes, fireworks exploded to celebrate the Fiesta de San Miguel. Tradition that was abandoned 200 years ago and brought back by the people of Ajijic in 2016.

“We ask the people not to make the cohetes, but they say it is for the fiesta and fire them even though we tell them they are bothering the people – están molestando – and should not do it,” says Padre Everardo of the Parroquia San Andrés Apostol, the Catholic Church on Calle Marcos Castellanos. The bells are rung by the church to accompany worshippers as they enter, but the church opposes the fireworks.

According to the Ajijic Delegado, Juan Ramón Flores organizations must obtain a permit from the Ajijic bomberos to ignite the fireworks from locations like the Plaza or the Malecon. A bomberos permit specifies how many, what kind, and what size cohetes can be, but it is unclear if they cover early morning fireworks in the neighborhoods.  But the processions, masses and cohetes are a treasured tradition in Ajijic, which is why the neighborhoods worked hard to revive them after 200 years.

Ajijic also celebrates its other patron, the Virgin of the Rosary, whose 400-year-old image resides in the Capilla Nuestra Señora del Rosario, the small church on the Ajijic Plaza next to the Centro Cultural.  It begins with a procession at 5 p.m. carrying the image of the Virgin of the Rosary on September 29th that moves to the Church of Guadalupe in barrio sies esquinas on Calle Ocampo in West Ajijic. The next day, the image is carried in a procession from the Church of Guadalupe to the Parroquia San Andres Apostol. The procession begins around 6:30 pm and may entail fireworks.  And the community cohetes may start again the next morning at 5am along with music and singing as the parishioners serenade the image of the Virgin. The cohetes can continue every morning until October 31 when the fiestas for Dia de Los Muertos begin. In addition, the 20 of November begins the party or the Saint Andrew’s – Ajijic’s principal patron-.and goes through the end of the month. Moreover, yes, there is more fireworks.