copyright by Ricarda Ecker _ The two boys who followed me around the streets of Mezcala.

Since a few weeks, I am already in Mexico. I have seen the cities from Jocotepec to Chapala and I have visited Guadalajara, so the next on my list of places I wanted to go, was Mezcala.

Just arrived at Mezcala, I soon had to notice that the people in the area are far poorer than those, just a few kilometers away, in Chapala or Ajijic. The houses are old and broken, often fixed just with a tarp. And there were so many people, mostly kids, who I sadly realized, should have been at school instead of working in the streets, begging for some money or selling all kinds of stuff. Old clothes, fruits and vegetables, drinks and so on. All those people tried so hard to sell me some of their stuff. I felt guilty that I didn’t buy anything. I realized that I did not just feel like the only non-Mexican in town, I was the only non-Mexican in Mezcala that day. 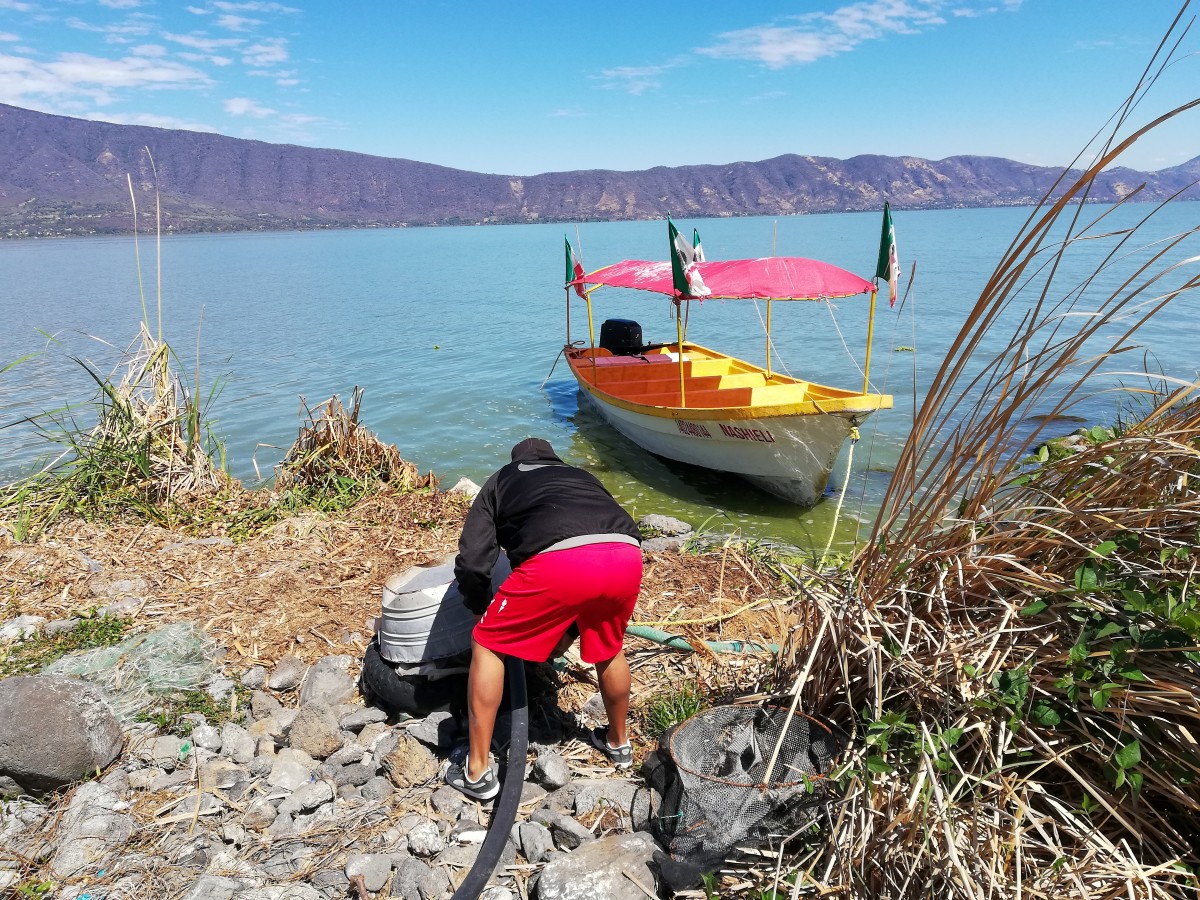 copyright by Ricarda Ecker _The guide and the yellow boat.

Although, I had heard before that there is a tourist information in Mezcala with at least one guy who speaks English and who could help me to get to the famous “Isla de Presidio”. I thought I would walk around the city and to the lake first and find it later. By the time I saw the lake down the street, a boy, maybe around twelve years old, on a bike way too big for him, started to follow me and talk to me in Spanish. At first, I thought he was begging for money and I tried to ignore him, but he kept riding along my side and said the same words a few times more. I just kept answering “no” and “thank you”, but he didn’t give up. Once again, I wished I would have learned some Spanish.

By the time I reached the small malecon a second boy, about the same age, showed up. He couldn’t speak English either, but at least he said the words “island” and “boat”. I thought to myself that I wanted to go there anyway and they worked so hard to get my attention, so I asked with a few gestures, how much it would cost. They understood and answered in Spanish: “350 pesos por una hora”. For a short moment I thought about it, two boys, no grown up and no boat in sight, but I finally decided to go for it. What could happen? Well, they could leave me on the island, the boat could be dangerous, do I just rent a boat and have to go there alone, they could rob me, and so on. But I wanted my trip to be an adventure and so I said “yes”.

The boys went ahead and I followed them around a corner and there we met a young Mexican man -a grown-up!- For a second, I was really relieved. But soon after, I had to find out that he couldn’t speak English either. But well, I had wanted an adventure – There I was, in the middle of it.

Before the guide got on the boat, they asked me to pay the trip. Both boys knew the word “money”. I had just 500 pesos and they didn’t have any change. So, they said, again with many gestures, that I could pay later and they would get some change in the meantime. The young man and I took off to the Island in a small yellow motorboat.

The guide did his best to tell me the stories about the Island and the old buildings on it and I did my best to understand him and nodded friendly, when I didn’t. He even took some pictures of me. A very nice and fun trip, not dangerous at all. 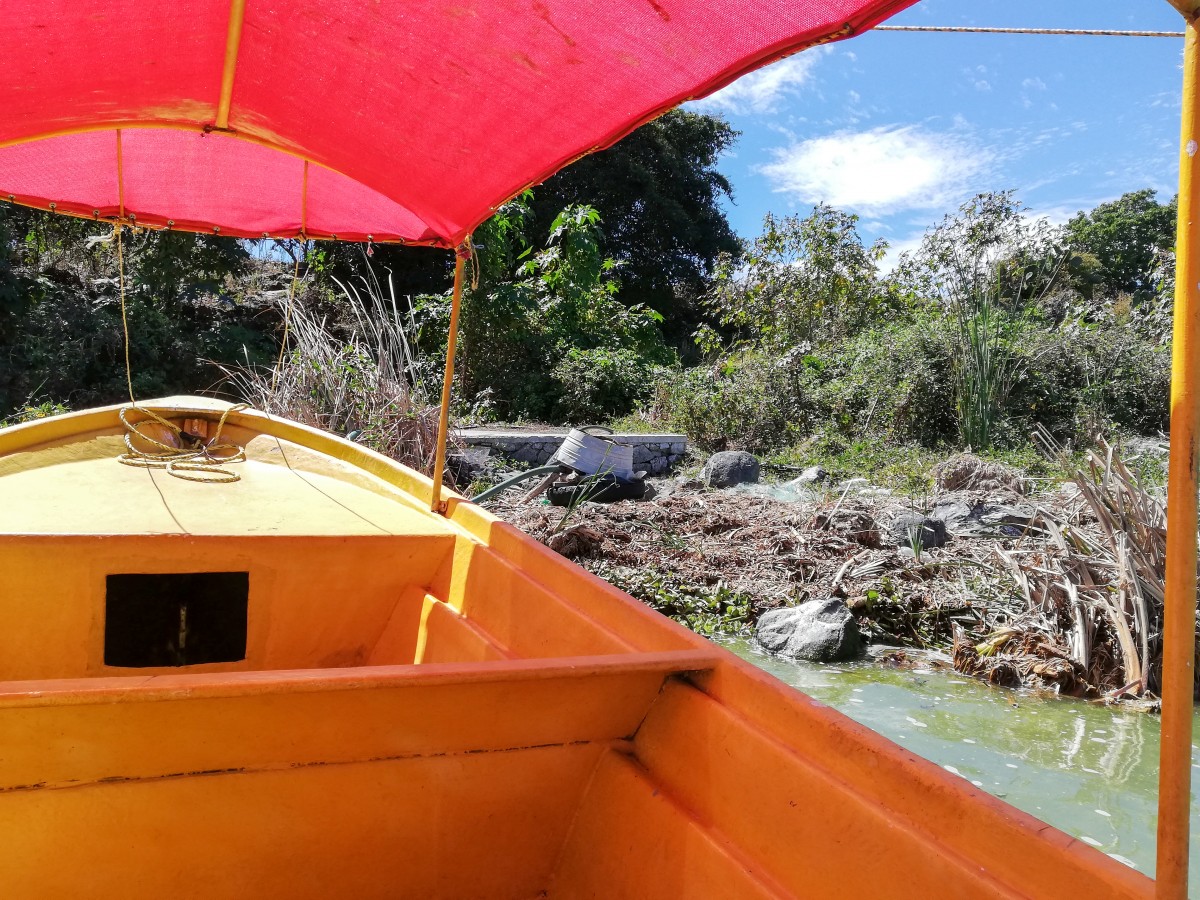 copyright by Ricarda Ecker _ In the yellow boat on the way to the Island.

When we came back, the boys already waited at the shore. They helped to moor the boat and didn’t let me get off, before I hadn’t paid the trip. Again, I just had 500 pesos and they didn’t get any change in the meantime. But I was okay with it. The trip had been really nice and so I gave the guide 500 pesos and said he could keep the change. He thanked me and helped me to get off the boat.

I walked straight back to the plaza, and again, the two boys followed me: “Money, money!”. I was confused. I had just given that man a 150 pesos tip?! Then I understood, that this had been his money and not theirs, but as I still had a few pesos left in my pocket, they also got their share and left there with a smile on my face.