The Philharmonic Orchestra of Jalisco began its season with a concert in Jocotepec. Photo: OFJ.

Héctor Ruiz Mejía (Jocotepec).- The Jalisco Philharmonic Orchestra (OFJ) performed for the first time in the municipality of Jocotepec.

Hundreds of citizens packed the temple of Señor del Monte to listen to the first concert of the orchestra’s tour outside the Metropolitan Zone of Guadalajara (ZMG).  With guest conductor Mariana Martinez, the orchestra will visit the 12 regions of Jalisco.

Noé Reynoso Hermosillo, Culture Director for the municipality, said that the 368 tickets distributed by City Hall for the recital were sold out, and additionally, there were people from other delegations or municipalities who attended.  A little less than 500 in total, due to the limited capacity of the venue.

Full house at the temple of the Lord of the Mountain to listen to the Philharmonic Orchestra of Jalisco. Photo: Carlo Cuevas.

«Although this was a municipal event, was more of a regional event, because people came from Ocotlán, from Guadalajara, from Jamay, from La Manzanilla, even from Tizapán,» commented Reynoso Hermosillo.

«They should bring this type of event more often, I loved it, I loved seeing so many people enjoying real music, something other than Maluma,» commented one of the attendees to the musical.

Culture director Hermosillo was satisfied with the results of the orchestra’s first presentation in the municipality.  Previously the orchestra was reluctant to perform outside the ZMG as «it was very expensive.»

This was the first concert of the Jalisco Philharmonic in an «extensive» tour, said Noé Reynoso, which will tour the 12 regions of Jalisco as part of the strategy of decentralization of culture of the Ministry of Culture of Jalisco.

Area of the accident in the lake.

Editor.- A man died after suffering an accident in his kayak while on Lake Chapala in San Antonio Tlayacapan. The accident occurred during the afternoon of May 1st.

The person entered the lake, but was not seen leaving, so help was requested. Unfortunately, help was too late and the young man lost his life by drowning. His body was recovered. The deceased was a well-known and respected person with a family in the town of San Antonio Tlayacapan.

During that day, a fishing tournament organized by the municipality of San Antonio Tlayacapan was being held on the boardwalk.

A planter had to be moved with a crane to allow the truck to pass.

After unsuccessful maneuvering attempts and wanting to move the other truck, the operators decided to call a crane to move a planter so that the pickup, whose owner was not present, could be moved and the mammogram unit could get out of the situation.

The Regional Prosecutor’s Office served an arrest warrant against Joshua A. for suspicion in the crime of aggravated child sexual abuse, and corruption of minors.

Investigations by the Investigative Police division led to the locating, and arrest of this man. He was arrested at the intersection of Isla del Presidio and Los Maestros, in the Gastronómica neighborhood, in Chapala municipality. Joshua A. is allegedly connected to the sexual assault of a child reported earlier this year.

Opinion: From North to South

Is this viable and positive for the country two years before the change of government? It will be difficult for legislators to approve the changes being sought and the proposal would remain only an attempt at a transition to more reliable institutions.

However, a policy change of this size is essential. Throughout the neoliberal period, there has been evidence the government could have functioned successfully had it not been complicit in fraud. Examples include 2006, when the Federal Electoral Institute was complicit with the Electoral Tribunal of the Judiciary of the Federation. Likewise, in 2012 with the massive vote-buying led by the Institutional Revolutionary Party.

This reform would modify 18 constitutional articles and include seven transitory articles. The National Electoral Institute, or INE, would become the National Institute of Elections and Consultations. It would eliminate 200 plurinominal deputations [a proportional representation in which votes are cast and counted for a list of named candidates collectively, rather than for individuals], list senators, local public electoral bodies and state electoral tribunals, reduction of the number of members of local congresses and regidurías, in addition to the establishment of popular vote as a mechanism for the election of the councilors of the electoral body and of the magistrates of the Electoral Tribunal of the Federal Judicial Power.

Another significant change, which makes approval of the proposal more difficult, would be the end of public financing for the ordinary activities of the parties, which would only be given a budget to face the elections.

The country’s democracy has been manipulated by the interests of those who have been governing for decades with the sole purpose of plundering the nation. On numerous occasions, it has been demonstrated that this electoral system does not work. This proposal intends, among other points, to reduce the number of councilors from 11 to seven and that these be elected, together with the magistrates of the Electoral Tribunal, by popular vote. The election would take place every six years, before the presidential elections, from 60 names proposed by the Executive Branch (20), the Judicial Branch (20) and the Legislative Branch (10 from the Chamber of Deputies, 10 from the Senate).

Likewise, the Chamber of Deputies is to be reduced from 500 to 300 legislators. The deputies would be elected from lists of candidates nominated by the parties and independent candidates in each of the 32 states.

The Senate of the Republic is contemplated in 96 senatorial seats out of 128; eliminating the current National List and generating that the three senatorial seats in each entity are elected from state lists.

Currently, INE owes a lot to Mexicans. It failed in the recent call for the revocation of mandate. In every electoral process there are reports of falsification of minutes. Councilors have been accused of obeying particular interests, especially those of the PRI. Their credibility is at rock bottom, according to the opinion of millions of Mexicans. The institution could use a change and a considerable saving in its budget.

The mayor of Chapala, Alejandro de Jesús Aguirre Curiel, during the inspection of the rehabilitation of the Riberas del Pilar park entrance.

Editor.– The municipal government of Chapala is continuing with the rehabilitation of public spaces in the city and the municipality’s surrounding towns. According to the municipal president, Alejandro de Jesús Aguirre Curiel, one of the locations receiving attention is Riberas del Pilar Park. The park is one of the most emblematic places of Riberas, with the two stone pillars supporting the neighborhood name.

«The Recovery of Public Spaces program continues throughout the municipality. Soon the public will be able once more to enjoy the Riberas del Pilar Park,» City Hall announced on social media. 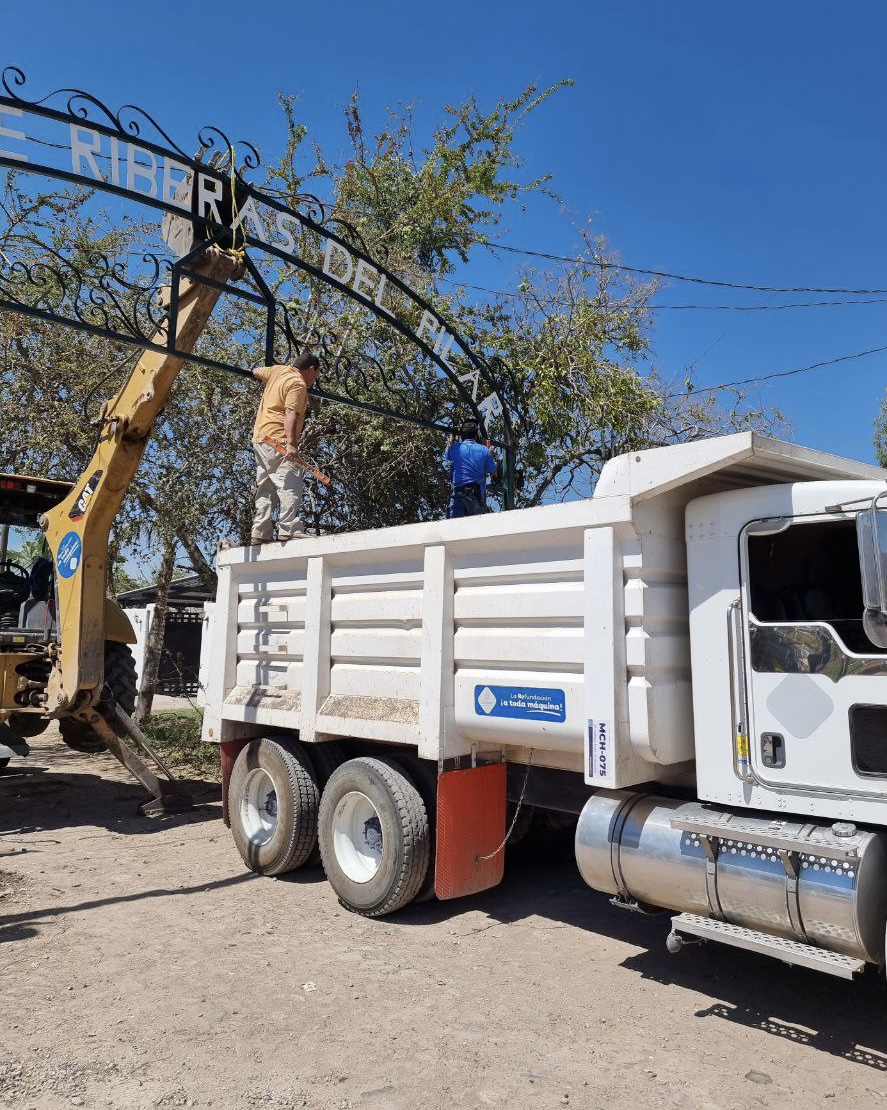 Workers of the Municipality of Chapala start with the rehabilitation of the Riberas del Pilar Park.

«The recovery of public spaces is being carried out with the objective that families will be able to enjoy public spaces worthy of our municipality and its people,» the director of Social Communication informed Seminario Laguna.

In addition to the iconic pillars, the sign for the park also received a freshening up.

Héctor Ruiz Mejía (Jocotepec).– Despite some of the Jocotepec boardwalk merchants reporting low sales during the Holy Week and Easter holiday season compared to last year, Víctor Loza Ornelas, Director of Tourism and Artisan Promotion, confirmed that the holiday period brought approximately $1.8M (about US$90,000) to the local community, saying » it’s a very good number.»

During the last rainy season, Lake Chapala reached 74% of its capacity; it is currently at 67%, informed the National Water Commission (CONAGUA).

Despite the decrease in the level, it is still up compared to April 2021, when it was at 51% of its capacity.

Alma Serrano (San Juan Cosalá).- This Sunday, May 8, the second Fishing Tournament will be held on the San Juan Cosalá boardwalk from 10:00 am to 3:00 pm. It will be a free category and the first ten winners will be awarded cash prizes; first place with 1,500 pesos, second place with 1,000 pesos and third place with 700 pesos. The registration fee is 50 pesos per participant.

Runners from Ajijic stand out in national competition

They are José «Jou» Valenzuela, Filiberto Pérez Vega and Nadia Vega, who ran in the free category, covering different distances: Jou competed in the 50 km race, reaching ninth place, Nadia in the 15 km race, achieving sixth place and Filiberto in the 30 km race, positioning himself in fifteenth place.

Both Filiberto and José said they were happy with the experience, even though they described it as a «hard» race. For Nadia, this competition is the second in which she has participated outside of Jalisco.  She shared that she found it incredible to go out and see these places that she described as beautiful.

«Because of my injury, the race was a little difficult for me, but I finished it out of pride. On the route, organizers supported me and gave me a pill for the pain to keep me going. Although I did not reach the goal I had set for myself and felt frustrated, it motivates me to continue and to do better in the next races,» said Jou Valenzuela.

The three mountain marathoners agreed that they will continue running in races outside of their hometown, and that they feel very motivated – as well as grateful – for the support that the people of Ajijic have given them.

When asked about how runners are selected to represent «Team Jou» in this type of race, Valenzuela said that they are chosen for «the commitment» they put into their training.

He also invited anyone who wants to be part of his team to contact him through his Facebook page, «Jou Valenzuela» so that he can provide them with information about the group.