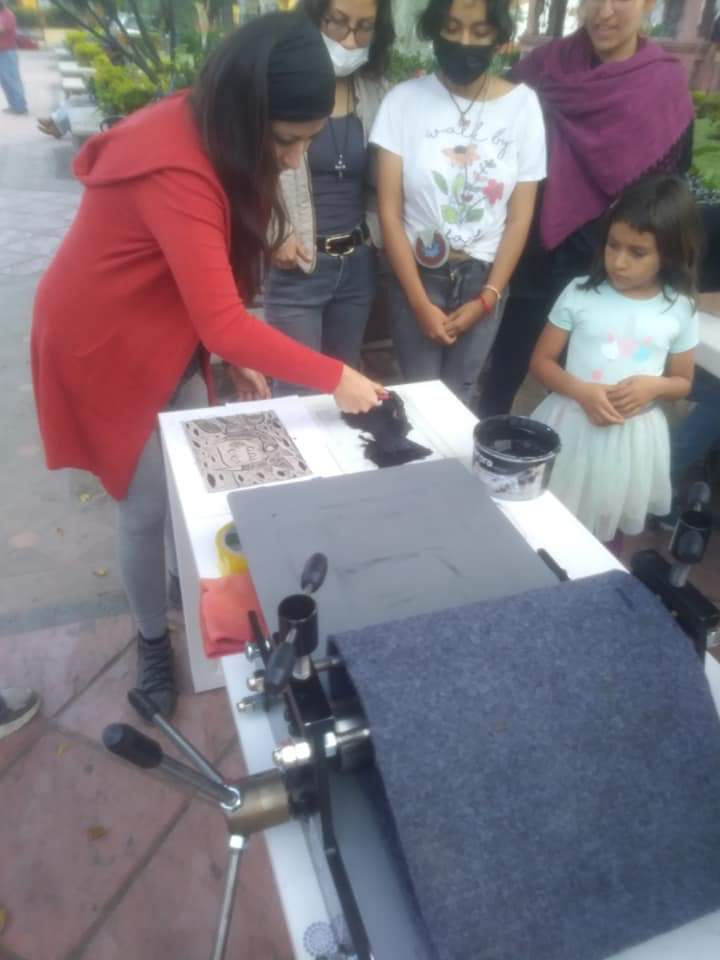 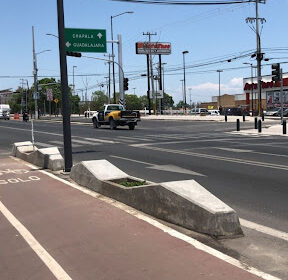 Honey, can you tell if the light on the Carretera is red yet?

I can’t see it.  I think the green light is broken, or at least so dim it is invisible.  But I have to practically lean out of the window to see it and I can’t do that in this blouse. Can you see the other light?

There is no other light, hon, that is why I need to know about the lights on the Carretera.

Why didn’t they put a light on the other side of the highway?

I don’t know, honey.  Maybe the same reason they don’t fix the lights when they burn out or get damaged. Just look at this one next to us – it looks like a truck killed it and it is not quite ready to die.  Hold it, this delivery van wants to turn into the street  here so I have to back up so he can get in.

I think we just got a green – the car facing us is starting into the intersection. Try your left turn now. They have a light on this side they can see.

As soon as this truck lets me move, hon.  Damn…the light just went red again. Now we have to wait through another cycle.  What idiot designed this intersection?

You know who – the same so-called Federal  engineer who designed the Walmart intersection. Why don’t you just turn right and then make a u-turn?

Yes! Hold on, hon…I made it. U-Turn at Pemex coming up.

Nicely done, dear.  Driving in this town is like playing a video game.

Hon, video games are easier- everything generally works and there is a help desk.  Would you look at the signal at Juarez, just hanging down like that. If this is a Federal highway, the Mexican government should be embarrassed.

If the Administration is not embarrassed by the Maya Tren fiasco and the abandoned airport and the collapsing metro in Mexico City,  the lack of traffic lights in Ajijic won’t phase them.

Hon, you are so right. Now, tell me why is it that the Federal highway workers can shut down the Carretera  in rush hour to resurface the road which they could have done at night much faster, but they can’t manage to fix the broken traffic lights? Can’t Chapala do anything?

They tried, but it is a Federal highway.  Remember when the Chapala Director of Mobility got so frustrated with no-shows from the Feds he went out and synchronized the lights himself.

I do. One of my Mexican  beer buddies  suggested dumping truckloads of horse manure in front of the Federal Transportation office in Guadalajara until they get the message that their roads are not fit for cars.

I don’t think it would help, dear.  They don’t care and they have so much horse pucky of their own that they shovel at us, they probably wouldn’t even notice.

So true.  Wait, did the light just turn green?

Free theater and music to be presented in November

D. Arturo Ortega (Chapala, Jal).- A “clown theater” and four musical presentations is what Estación Cardinal Chapala, Un Cargamento de Cultura will present in the month of November in coordination with the Centro Cultural González Gallo (CCGG), Secretaría de Cultura Jalisco and the Dirección de Cultura de Chapala. All presentations are free and suitable for all audiences.

This month’s program opens with a presentation of «Ranzio, a fantastic zombie», a circus clown theater show that shows the difficulties of being and thinking differently in our society through a character that combines music, magic, circus and comedy. The presentation tookes place this Friday November 12 at 7:00 p.m. on Chapala’s malecon at the open-air forum «Salate de Felisa.»

World music comes to Chapala with Phi and Tala Friks, two groups that will perform this Saturday, November 13, starting at 5:00 p.m. in San Antonio Tlayacapán’s plaza.

The sound of the guitar and transverse flute will be heard this Sunday, November 14, at the CCGG at 12:30 p.m., with the interpretation of David Mosqueda on strings and Nury Ulate on the wind instrument.

The whole family is invited to enjoy a beautiful sunset concert on the Ajijic boardwalk with Gil Rios Quartet and Marea Fandanguera on Saturday, November 20, starting at 6:00 p.m.

A Concert with a Cumbia Flavor will be brought by the musical groups Los Afrodisíacos and La Pura Piña, who will conclude the program with a presentation at the open-air forum located on the Chapala boardwalk on November 27 at 7:00 pm.

Redaction. – With the crown of Miss Grand México 2021, Mariana Macias of San Antonio Tlayacapan, will face a new challenge in the beauty pageant catwalks representing Chapala and México in the ninth edition of the Miss Grand International 2021 pageant, to be held from November 16 to December 5.

Mariana, who in a local media  interview  said that  hers would be México’s first participation in the Miss Grand International pageant, has begun the research about the host country and is ramping up her public speaking and catwalk schedule as well as her physical exercise, among other disciplines on her way to Thailand.

If she qualifies and  wins in the distinguished beauty pageant finals on December 4, the former Miss Jalisco 2019,  said that she will expand  her agenda of activities to include trips to different countries.  But for now, she feels like a winner in the vast increase in her self-confidence.

Looking to promote the cultural identity of San Antonio Tlayacapan

«One of the necessary and difficult issues is the generation of the town’s cultural identity; the lack of it means that the town is not well understood by the residents. They don’t know who creates what. We hope that with historical and heritage information and exhibitions, we can generate an identity or at least provide a sense of it,» Octavio said.

Octavio Ignacio Pérez, a poet, paper mache artist, furniture upholsterer, and Editor of ,the digital magazine Campos y Plumas is new to government service.  He  is originally from Chapala, but has lived most of his life in San Antonio where his family  from.  He has been involved in education and with  social and cultural training  for children, teachers, young people, psychiatric patients, etc., as well as workshops and collectives in San Luis Potosí. He has also collaborated with the community museum Atotonilli, in Hidalgo, where he worked on social and educational issues.

Octavio shared that his work plan for the first 100 days, in collaboration with Director of Culture in Ajijic and San Antonio Santiago Baeza which includes workshops in reading and plastic arts, festivals, plus the creation of a library and a collaboration with the recently inaugurated Community Museum of San Antonio Tlayacapan.

The plan  also aims to create murals, promote urban art and cultural and artistic exchanges. In addition, he wishes to bring focus to local monuments, such as the tower of the Cuauhtémoc Primary School, and to publish information about the history of San Antonio Tlayacapan  to share with visitors and with the locals.

Backed by the community, officials and artists, Octavio Pérez feels ready to undertake this project that will bring colour and cultural and artistic energy  to the community. Although he said that the first 100 days is a short time, he hopes to take  the first steps of this ambitious project. Currently, the town delegado is looking for spaces that can accommodate artistic activities.

Tenders will be announced through the Facebook of Cultura Tlayacapan and San Antonio Tlayacapan; Octavio also pointed out that he is waiting for the creation of a community radio station where they will be able to spread the word more widely.

Flowers, candles, ofrendas, portraits of relatives to whom they want to dedicate the altar, and other items can be taken to Gustavo Aguayo de la Torre in the San Antonio delegation office, or installed before November 2 in the main square.

“Delegation workers will begin in the next few days, and the people of San Antonio will see the work being done. Once the structure is finished, everyone can put up their own altars as part of the larger San Antonio community altar,” Baeza said. 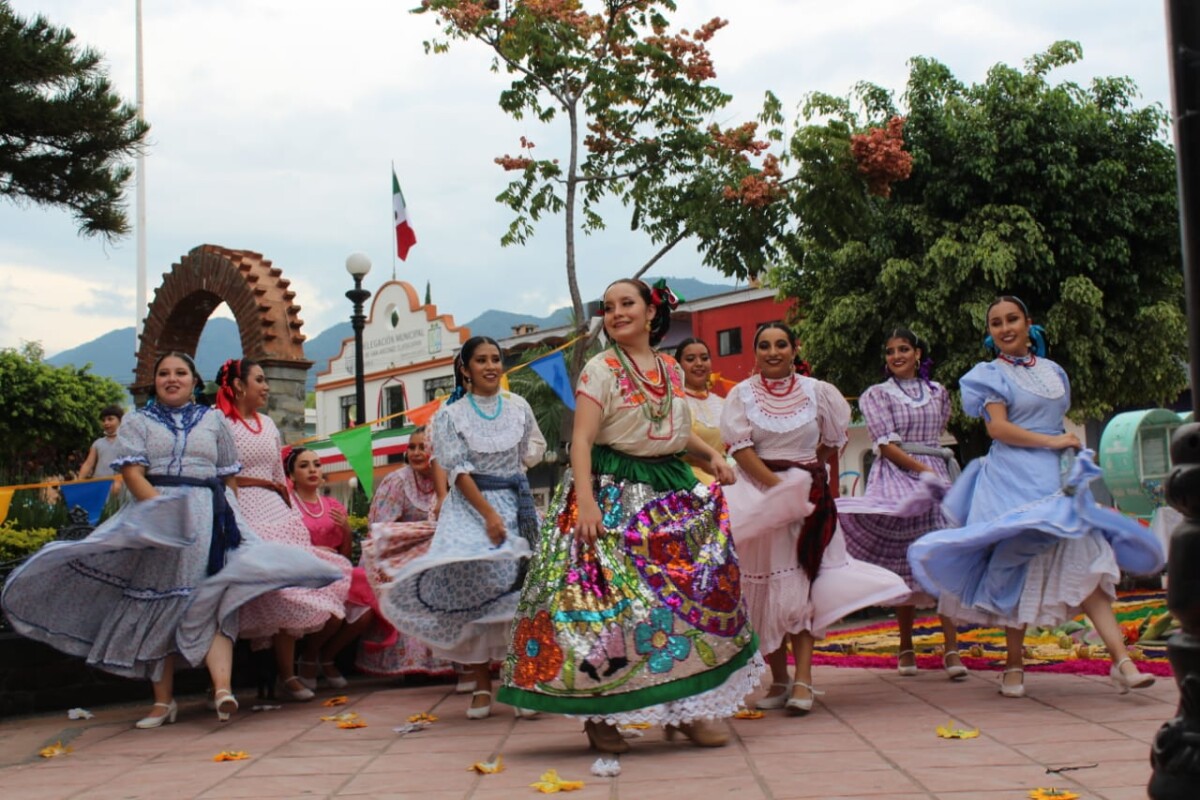 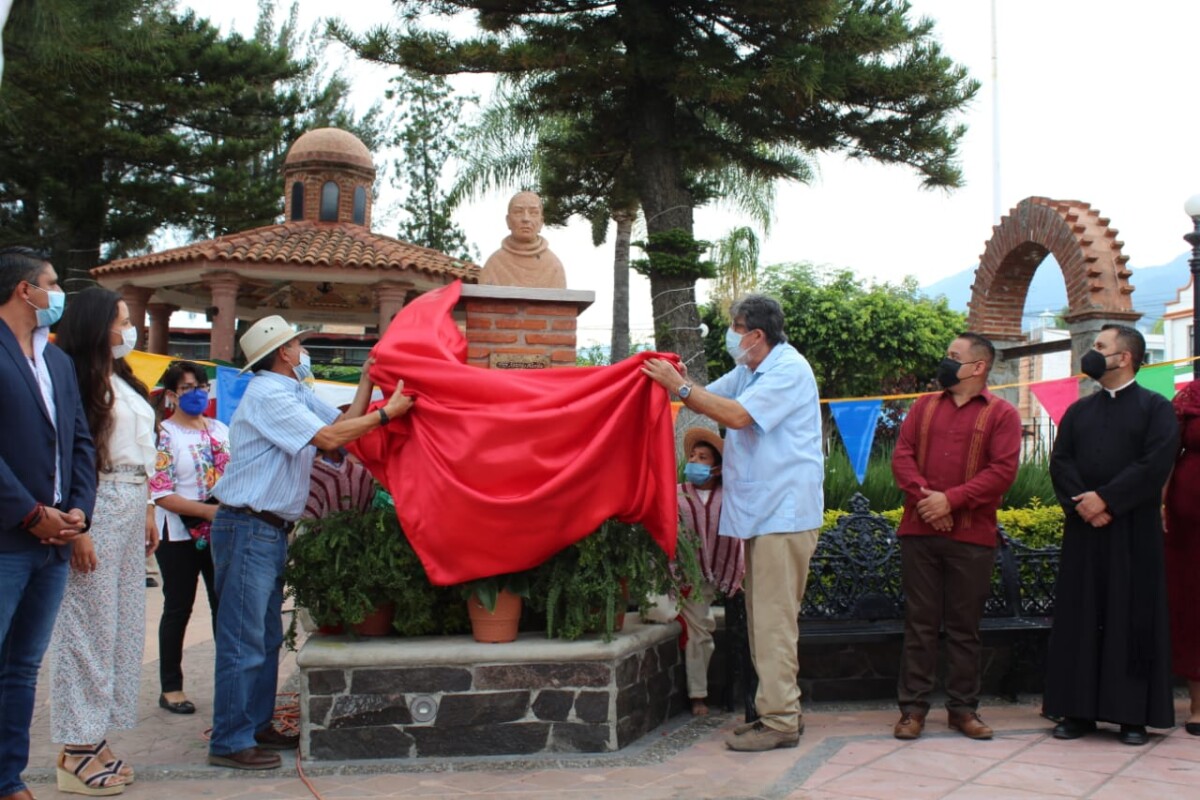