First honors to the flag at Urban School 699, Ignacio Zaragoza.

Alma Serrano (San Juan Cosalá).- For the first time since the two years of suspension due to the Covid-19 pandemic, last April 25 the honors to the flag were resumed in the schools of San Juan Cosalá.

The first honors of the year were held at 8:00 a.m. on Monday, April 25 in the courtyard of the Ignacio Zaragoza Elementary School. The honors to the flag were also held at the entrance time at the Encarnación Rosas and the Urbana 1107 Gabriela Mistral.

Luis Morales, teacher at Escuela Urbana 699 Ignacio Zaragoza explained that the civic act was resumed after both the Governor of Jalisco, Enrique Alfaro Ramírez, and the Secretary of Education, Juan Carlos Flores Miramontes, authorized it.

A Tyrannosaurus Rex escaped from its habitat at the CUOP Jurassic Park to live with the children of kindergarten, preschool and elementary school in an interactive show. Photo: D. Arturo Ortega.

The students of the Octavio Paz University Campus (CUOP)  a Jurassic experience during the celebration of Children’s Day at the school’s  Ajijic facilities, which this year was celebrated with dinosaurs.

The experience began with a safari-like tour, where upon entering the educational facilities, they emulated the habitats of the dinosaurs. Photo: D. Arturo Ortega.

The experience began with a safari-like tour,  through a Jurassic park-like environment guarded   by paper-mâché sauropods that surprised the parents  as they dropped off their children at school.

During the rest of the day the students learned different play activities in each classroom where they were able to make a fossil, the workshop where the children assembled their safari vehicle, feeding the dinosaur, among other activities. 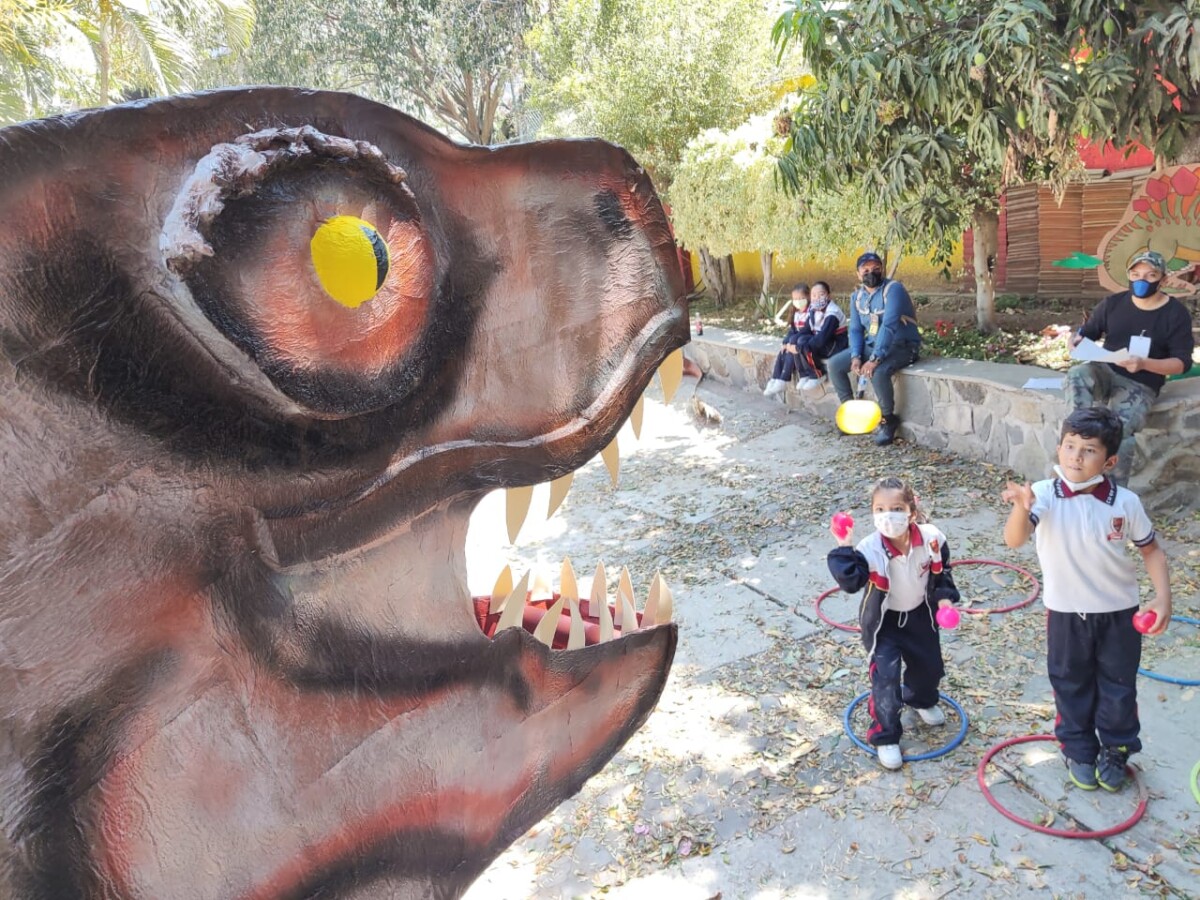 During the rest of the day the students learned different playful activities, such as feeding the dinosaur. Photo: Mr. Arturo Ortega.

The day concluded when a Velociraptor and a Tyrannosaurus Rex escaped from their habitats at the CUOP Jurassic Park to spend time with the kindergarten, preschool and elementary school children in an interactive show with fun games for the  little ones.

The Los Bichos team won the championship over their similar team Los Bomboneros with a score of 3 to 1.

Editor. – With a score of 3 to 1 over their rival Los Bomboneros, the Bichos team was the winner during the final match, being crowned champions of the interim soccer tournament that was held for four weeks at the Terranova Institute.

Students and teachers from high school and middle school at the Terranova Institute kicked off the Terranova 2022 Inter-School Tournament with six teams participating, from Tuesday, February 22 to Thursday, April 7.

Right from the start, the Bichos team won over the Cuervos, 5-0, demonstrating their desire to win from the very beginning of the tournament.

The prize for the winners will be an all-expenses-paid trip to the movies, as well as recognition for the participation of the students who made up the six participating teams.

The next tournament will be held after the Holy Week and Easter holidays.

The draw for the formation of groups was held at the Code Paradero Velodrome sports complex in Guadalajara on Wednesday, March 6. Photo: Government of Jalisco.

Redaction.- The Jalisco Cup 2022 amateur soccer championship will begin this weekend in the men’s division and a week later in the women’s division; in total, more than 200 teams will participate in its third year of competition.

The Jalisco Cup will be played from April 9 to August 7 with 118 teams in the men’s category and 74 in the women’s category; the draw for the formation of groups took place at the Code Paradero Velodrome on March 6.

The Chapala men’s team is emerging as one of the Cup’s favorites. The team took second place in the 2021 tournament, winning a trip to Spain as a prize.

This year, the winning team will travel to France to see the training of the Paris Saint-Germain Football Club team. The prize for the runners-up will be a trip to Colombia.

In the men’s division, the first match of the Chapala team will be as visitors against Tuxcueca, on Sunday, April 10 at 4pm; the Jocotepec team will play against Valle de Juárez, also as visitors, on the same day and at the same time.

The complete schedule of games can be found at https://copajalisco.mx/Rol_regular/4.

Students of the Foránea No.1 José Vasconcelos high school during the first day of anti-addiction talks/workshops.

Jazmín Stengel (Chapala).- Addiction prevention workshops will be given in public and private high schools in the municipality to raise awareness among adolescents in Chapala.

«Many things can give meaning to your life, but drugs will never be one of them,» was said during the launch of the program on March 14, at the José Vasconcelos Secondary School Number 1 in the municipality. The age of first substance use dropped from 18 to 10 years of age in the last 12 years.

The work team of the Municipal Commission Against Addictions, formed by counselors Luis Manuel Ramirez, Jaime Humberto Cortes Rios, Juan Carlos Garcia, and six other integral supporters are dedicated to informing the students of the municipality about the hazards of drug use.

During the workshop they discuss that addictions not only depend on synthetic or natural drugs or medicines. Today’s children tend to become dependent on technology and the internet as well.

The first phase of the program took place from March 14 to 24. Seven hundred and thirty-three students divided into 21 groups, about half in the morning shift and the rest in the afternoon from the José Vasconcelos high school were trained through talks and workshops informed Luis Ramírez, in charge of the coordination.

The next stage will be to instruct the adolescents of Technical High School 83 to learn to say «NO» and to know how to choose their friends well, thus preventing them from falling into the temptation of bad habits, said Ramirez.

The new entrance to Jardín de Niños Aurelia Flores will be a corridor located between the CETAC high school and the future offices of the Secretaría de Cultura. Photo: Sofía Medeles.

Sofía Medeles (Ajijic).-  During his visit to Ajijic on March 25, the Governor of Jalisco, Enrique Alfaro Ramírez, said that it will take approximately one month to provide an entrance to the Aurelia Flores Kindergarten, which was  blocked by the remodeling of the Auditorio de la Ribera.

This new entrance consists of a corridor between the Ajijic campus of the Center for Technological Studies in Continental Waters (CETAC) and the building where the offices of the Ministry of Culture will be located. Previously, the entrance to the kindergarten was through the same access as the auditorium.

«I asked them to speed up the work so that the children would not be at risk, because it is under construction. We have already started to free the passage, only the floor needs to be done. I hope that in a month it will be ready and working properly,» said  Governor Alfaro Ramirez.

The director of the parents’ committee, Lucia Padilla, advised that they have not been informed about the conclusion of the work being done for this new access to the preschool, in addition they had hoped that the entrance would be a little bigger.

«We wanted to ask for a slightly larger entrance, at least two meters, but we could not talk to the architect and the entrance was left at approximately one meter and 40 centimeters. We have not been told when the work will be finished, or anything else,» she commented.

Previously, several parents complained that, since the construction of the auditorium was in progress, the access through the main door of the auditorium was closed for the safety of the children. The problem has existed since the beginning of on-site classes in August 2021. The parents pointed out that the provisional entrance, which was through the Cruz Azul sports field, was uncomfortable for them and the children, especially in rainy weather and that the work did not seem to be progressing on an entrance exclusively for the students of the school.

In addition, the parents pointed out the poor condition of the classrooms, bathrooms and open spaces of the kindergarten after the pandemic.

CUOP celebrated the birthday of Octavio Paz with biographies and reading of poems by the writer who gave his name to the educational institution.

Editor. With sports and cultural activities, the students of the Octavio Paz University Campus (CUOP) commemorated the 108th birthday of the Mexican poet and writer who gave his name to the campus located in Ajijic. 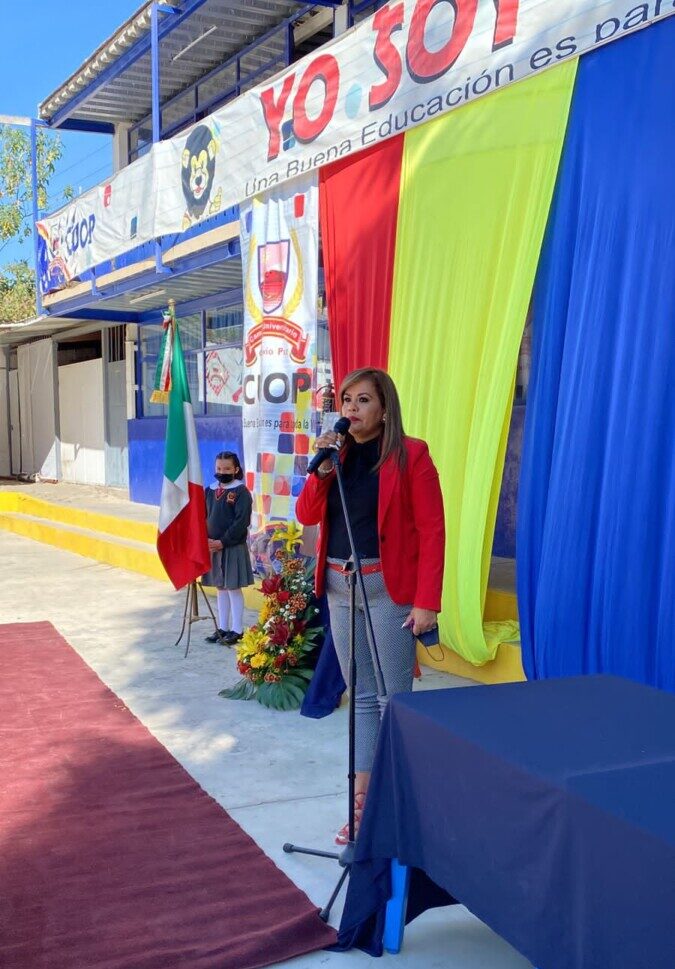 Elizabeth Gutiérrez, Rector of CUOP, thanked and congratulated all the participants in the event.

The event, held on March 31, began with the honoring of the national flag under the custody of the elementary school escort. Following this, aspects of the poet’s life were narrated by high school students, while the writer himself was brought to life by the elementary age students.

In addition, the youngest students of CUOP, nursery and preschool students, released balloons symbolizing the eternity of his work.

The high school participated with the interpretation of the poem «Otoño» (Autumn), which was presented in Spanish and English.

During the tribute, the Mexican writer was brought to life thanks to the presentations of elementary school students.

Students taking part in the curriculum of the University of Guadalajara (UdeG) read aloud the story «El Ramo Azul,» which concluded with an oral tour of phrases of the poet’s work. The ceremony continued with the presentation of awards to students who participated in the LIMATEJ mathematics tournament, organized by the Ministry of Education of Jalisco (SEJ), as well as to the students who won first and second place. 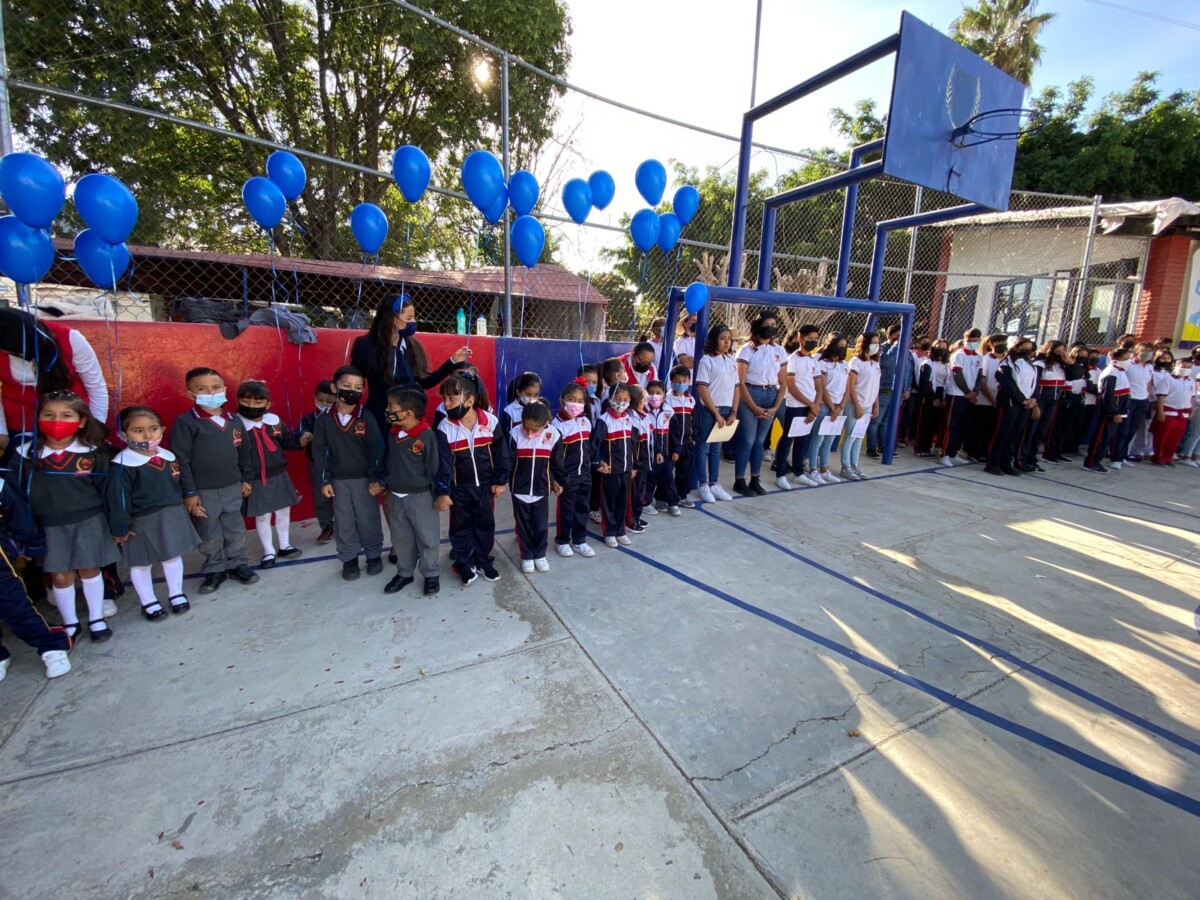 The youngest students of CUOP, nursery and preschool students, carried out a balloon release.

To conclude the event, Mrs. Elizabeth Gutiérrez, Rector of CUOP, thanked and congratulated all the participants in the event, inviting them to continue their hard work and reaping good results in both academics and sports.

Alma Serrano (San Juan  Cosalá).-  Ten-year-old Jhaneiva Sinahi Mondragón Morales, a student from San Juan Cosalá, won first place in the Jalisco State Mathematics League competition. The fifth grade student stood out in the math skills tournament held on March 23 at the facilities of the Terranova Institute, located in Ajijic. Fifty-two fifth and sixth grade children competed in two categories of 26 students each.  All study in school zone 96, which includes schools from Chapala to the El Chante delegation in Jocotepec.

Sinahi Mondragón earned the highest score of the day and  will represent her zone in a regional tournament, the date and place of which have not yet been defined.

Promoting the use of Ajijic’s virtual library

Sofía Medeles (Ajijic).- Despite being in operation, Ajijic’s virtual library, located in the Parque de la Amistad on the boardwalk, is underutilized, which is why Ajijic’s delegate, Maximiano Macías Arceo, will seek to improve its facilities to increase the number of users.

Macías Arceo commented that both the building and the computer equipment, despite having been in service since 2015, are in good condition and work well. The printer does not work, and this has been reported to the systems department of the municipality for review.

«We will try to give it a higher priority, since it is used by young people who attend to do their homework. There are very few cyber cafes in town, and this space makes it easier for them to do their activities, in addition to the fact that it is free,» he added.

The virtual library is open from 9am to 3pm, and on some occasions, it is open later in the afternoon. The computers have internet to conduct research on the web and submit work to student platforms.

The five delegations and the municipal seat of Chapala each have libraries, of which four were inaugurated in 2015, in the administration of then president Joaquín Huerta Barrios.

The investment was over 23 million pesos (about US$115,000) and the National Council of Science and Technology (CONACYT) awarded the federal project to three municipalities in Jalisco: Tlajomulco de Zúñiga, Zapopan and Chapala.

Each module has 21 desktop computers with a 23.6-inch touch screen, Windows 8 operating system and Internet service.