Patrick O’Heffernan, Ajijic. Ribera Medical Center announced this week in its newsletter that its Board of Directors and owners have recognized the urgent need for Covid-19 treatment and decided to modify the hospital to provide an isolation ward which can be used for Covid 19 treatment.

RMC Medical Director Dr. Santiago Hernández , M.D. , told Laguna in a phone interview that an isolation ward will have to operate independently with its own entrance, staff, and equipment,  Covid patients will not be allowed to come to the ward through the hospital, but will have to enter directly into the ward through a separate, safe entrance, and remain in the ward, completely separate from the rest of the hospital. RMC, Lakeside’s newest hospital,  is located at  153 Libramiento in Ajijic, across from the Hotel and Condos Lago de Chapala El Dorado.

Dr. Hérnandez said that modifications will take some time and will have to be inspected and approved.  The progress of the ward will be covered in future newsletters, along with information regarding the Covid treatment protocols.  He recommends that as the hospital releases treatment information, people should add it to their medical history and emergency files at home.

Puerta Hierro Hospital in Guadalajara where blood donations will be taken from Rotary Ajijic donors.

Patrick O’Heffernan, Ajijic.  The Rotary Club of Ajijic is partnering with the Municipality of Chapala and local sponsors to launch a monthly blood drive, starting this Saturday, February 27.  The drive will continue on the fourth Saturday of every month.

Anyone who is healthy, 65 years old or younger can participate.  Donors will be driven to the Puerto Hierro Hospital in Zapopan – a member of the Mayo Clinic Health Care Network and one of Guadalajara’s finest hospitals – in private buses leaving at 8 am, 12 noon or 4 pm. Donors on the morning bus will be provided lunch at the hospital.

Donors will be given a health screening and a rapid Covid-19 test  at the Ribera Medical Center in Ajijic by Chapala ed staff before  leaving for Guadalajara.  After giving blood they will rest at the hospital and receive a t-shirt celebrating their donation.  The process is relatively painless and healthy individuals can easily give a pint of blood a month.

The local Rotary is reaching out to Ex-pats for the blood drive, but both Ex-pats or Mexicans are welcome and urged to become regular donors. Carol Wolff,  President of the Ajijic Rotary urges anyone who qualifies to donate blood regularly because of blood shortages in Lakeside.

“Hospitals are having trouble getting blood for surgery”, Wolff told Laguna in a phone interview, “and we realized that all Lakeside has a problems because of the many restrictions on who can give blood – it is only people 18-65 years old – so this is what we can do for the community.”

Wolff added that next month Rotary Ajijic will make a special appeal to parents of players in the Union Soccer project, sponsored by Rotary Ajijic.

The Rotary Club of Ajijic is one of the few bilingual(English/Spanish) Rotary clubs in Mexico, and has been serving the Lake Chapala area since 2002. Its members are business and professional men and women, many retired, who dedicate their time, expertise, and talents to helping others in our local area.

In the past it has been customary in Mexico to locate blood donors yourself for transfusions you may need for surgery as there is not always a steady supply of blood. But this is no longer the case as blood banks, such as the IMMS Centro de Medico de Occidente .

have been established.  There is currently no operating blood bank in Lakeside, but the new Ribera Medical Center in Ajijic has the equipment and is waiting for certification. A spokesperson for the San Antonio Hospital told Laguna that they obtain needed blood from Guadalajara-based hospitals, but eventually will establish their own blood bank

Dr. Santago Herndez, of Chapala Med and Medical Director and the RMC hospital in Ajijic, told Laguna that “we need these blood donations to keep blood on standby because some elective  surgeries have been cancelled  owing to lack of blood and because we never know when we will need it for an emergency – like surgery for a broken hip”.

Costs of the blood drive project are being covered by Rotary of Ajijic and the co-sponsors -Riberas Medical Center, Chapala Med, and the municipality of Chapala. However, Rotary Ajijic will soon begin seeking additional donors to cover the costs of a year-long program.  Wolff told Laguna that they estimate enough people will sign up for 3 busloads a month, but this is a test – it could be less or more.

The Community Hospital of Jocotepec has three mechanical ventilators.

Miguel Cerna.- The Community Hospital of Jocotepec has been declared a Level One admitting facility for patients in serious condition due to the coronavirus. Level one hospitals are adequately staffed and equipped but may not have all the facilities that higher level hospitals have. The Community Hospital has the necessary equipment and sufficient supplies for expected cases, according to its Director.

Edgar González Jiménez , Director of the Community Hospital of Jocotepec,  said that after a hospital restructuring and multiple trainings for the necessary staff and the installation of appropriate equipment, he considered that the institution is ready to provide care for eventual cases of Covid-19.

«I would say that the hospital is equipped to admit and care for seriously ill patients; that is a fact. We are not a Second or Third level hospital so we can’t say that we will attend to all who arrive, but that our capacity and infrastructure is first-rate for the patients we can admit.  However, we do not have an intensive care area,» he explained.

The hospital prepared for Coronavirus patients by dividing its facilities into two areas, one for the care of patients with Covid-19 and the other for non-infectious users (no Covid-19), who are at the hospital for other treatment or to see different specialties. The hospital, part of Health Region IV, has a workforce of 140.

The Community Hospital of Jocotepec will only be able to care for three patients at one time who require full hospitalization, since it only has three mechanical ventilators.  The hospital is equipped with two isolation mobile units that can transfer patients to Third-level hospitals when it has reached capacity. For patients throughout Jalisco, including Jocotepec, patients that cannot be treated at a local hospital will be transported to the Fray Antonio Alcalde Hospital (Civil Viejo), in Guadalajara.

Edgar González said that it’s more important for citizens keep up the isolation measures and  the sanitary measures such as hand washing and sanitation of households than worry about the care capacity of the hospitals that will attend to serious cases in the area.

Ramiro Pérez Gil, Director of Health Region IV based in La Barca, reported that they have sufficient supplies such as masks and special suits and other security equipment to supply the three hospitals that will attend to serious cases in the 13 municipalities in Region IV.  Pérez Gil also explained that the delay in the results of the suspected cases in the region is due to the backlog of samples to be analyzed, which can delay results for up to a week, although the agency’s protocol calls for results in 24 to 48 hours. (translated by Patrick O’Heffernan) 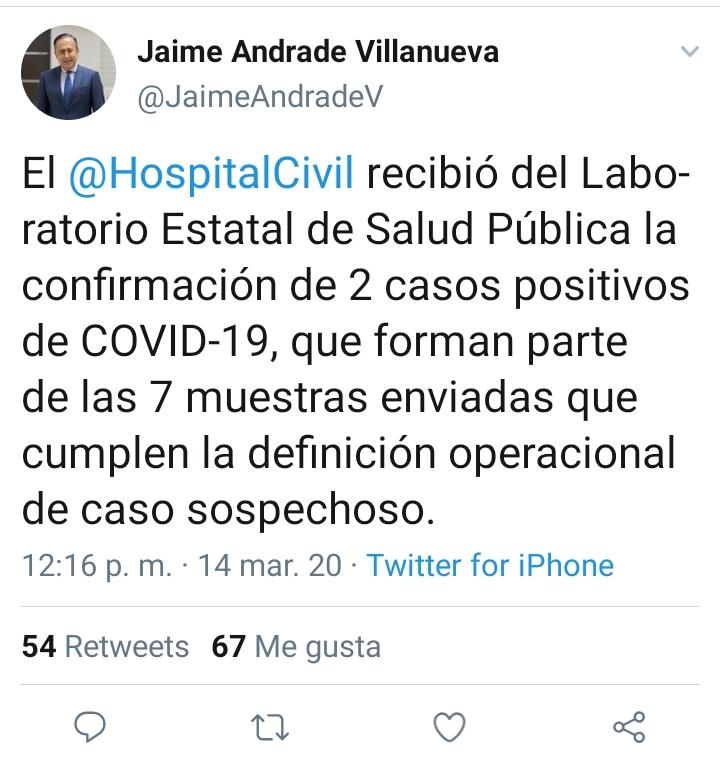